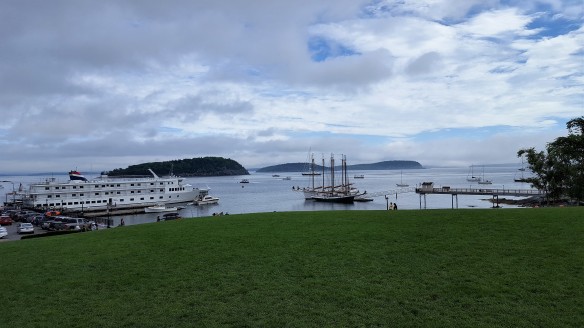 Sunday August 14, 2016 – We had reservations for a Whale Watching cruise at 8:30 with our new friends Colleen and Frank Marzigliano.  Trenton is about 30 minutes from the Harbor in Bar Harbor. It was about 60 degrees and foggy with a slight wind. We were dressed in blue jeans and long sleeves with jackets in the back pack. About 10 minutes into our ride to the Harbor, I got an email that the cruise had been cancelled due to the fog and lack of visibility.  So Cliff said “I’m not wearing the blue jeans all day, I have not had on a pair of pants since April”. So we turned around so he could change back into shorts.  We checked with Colleen and Frank and they were more than half way to Bar Harbor.  So we decided to meet for breakfast and then decide what to do.

We went to get our refund and the clerk said he could put us on the 1:00 cruise.  He also said that the temperature is about 20 degrees cooler out at sea and that we need long pants, jackets, hats, gloves, etc.  Well, now we have to buy some jackets.  We went in search and found some we all liked.  Another souvenir, Yeah!

Before we took off, the captain said we would be motoring into a fog bank and if anyone was not comfortable with low visibility, they should get off now. He said the seas could be rolling.  I don’t think anyone got off.  It was foggy and hard to see anything.  The whole cruise was narrated, so it was very interesting. 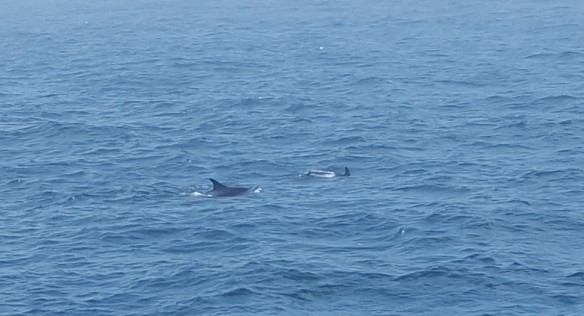 Then we spotted some dolphins.

Several of them playing.

I hope you can see the baby swimming next to her mom in the forefront of the photo. 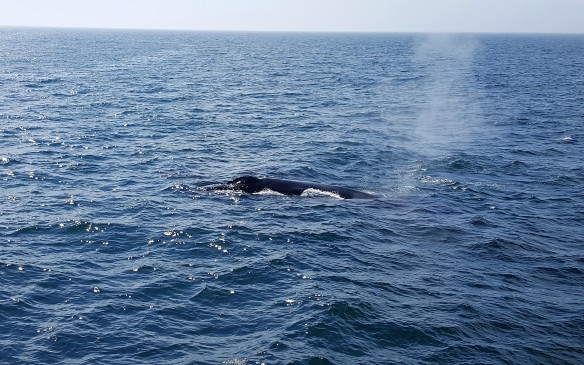 The captain decided to move to another area of the sea, the fog lifted and the sun came out and we spotted our first whale.  A hump back whale.  My first time seeing a whale in the wild.  Very Cool. 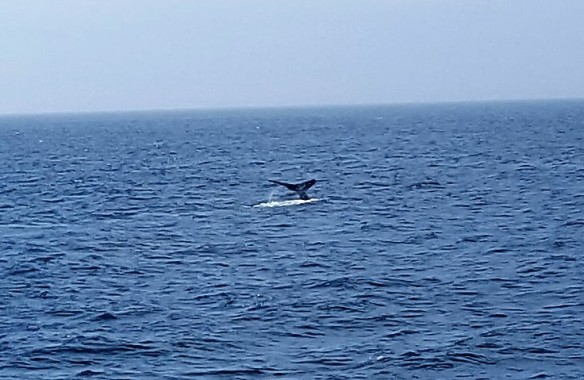 This was a mother and her calf.  The narrator even knew the name of this whale by the markings on the underside of her tail.

The captain circled as long as they would come up.  Eventually, they moved on and we had to get back to the dock.  He hightailed it back too.  He had stayed out longer than usual so that we could experience the whales.

It turned out to be a very exciting trip.

And we about froze our buns off.  It was COLD. This is Colleen and Frank.  We had such a good time.  We got back about 4:00 and decided to go to Route 66 for an early dinner.  I laughed so hard, my sides hurt for 2 days after that.  Can’t wait to see you guys again soon.

We decided to go to Canada today.  To get there, you go through Lubec, ME.

It was very foggy.  Looked like a picture of Maine. 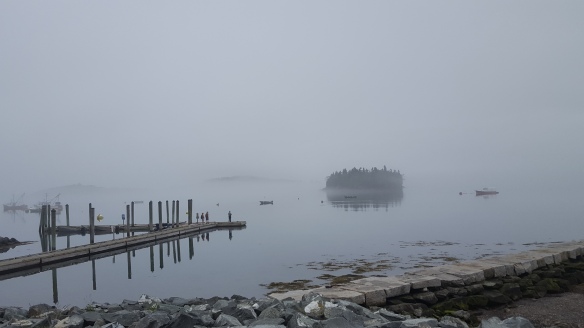 There was not much to see here.

So we headed to Canada.

Wait in line for border check.

And here we are. 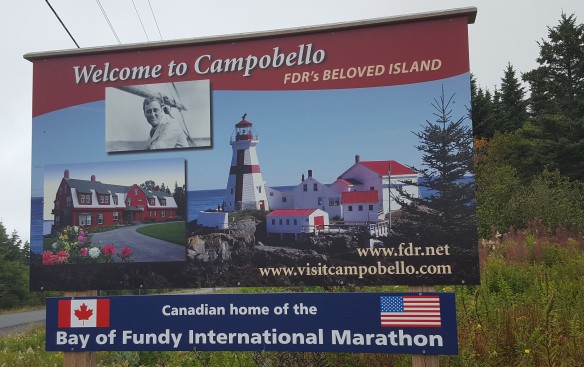 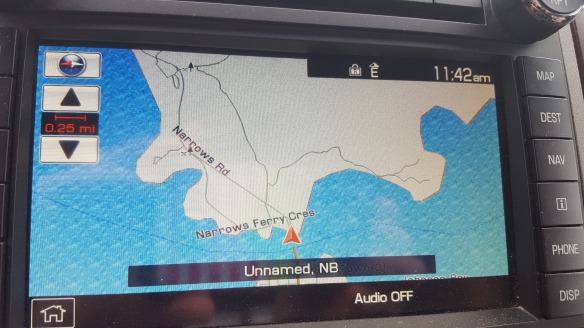 We got a map of the island from the visitor center. 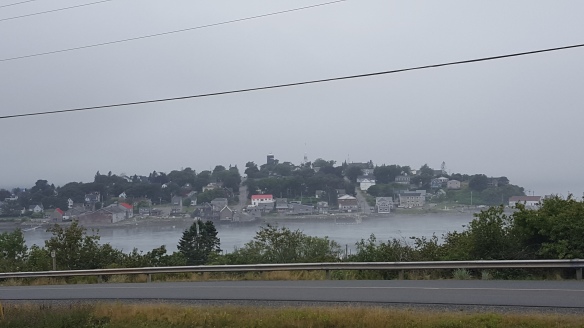 That is Lubec, ME from Canada.

This is the Roosevelt’s summer cottage. Eleanor was allowed to visit the cottage whenever she wanted after it was sold.

Everything in the home was owned by the Roosevelt’s, except for the wallpaper.

It was like they just walked away one day and left everything behind. 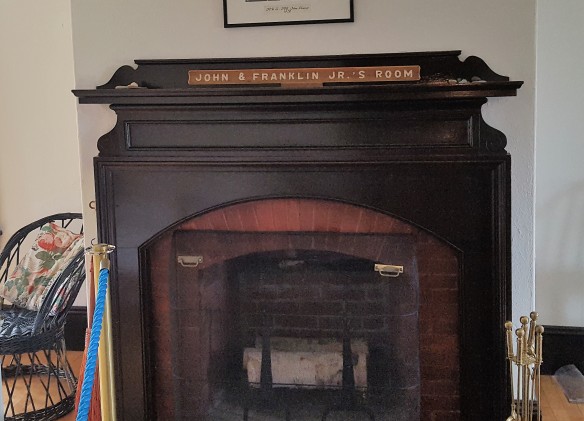 They had a sign in each room telling you whose room it was. 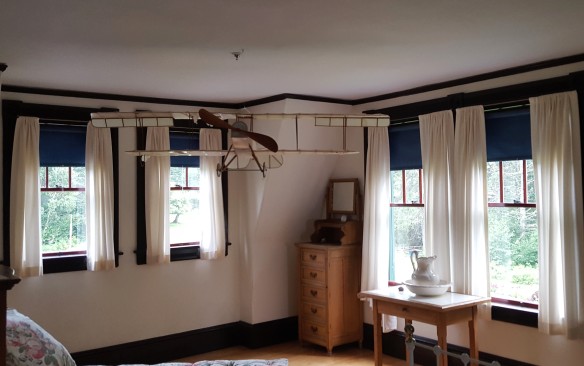 A Davis sewing machine.  I have never seen one. 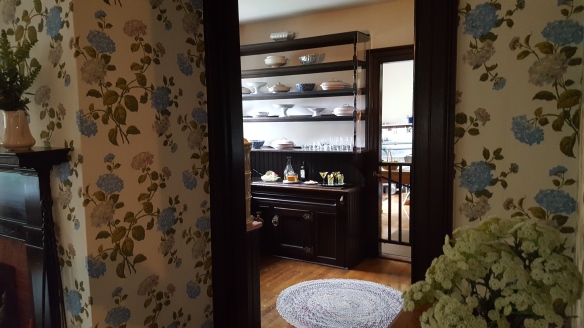 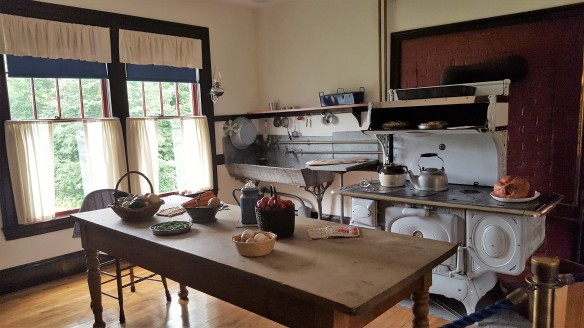 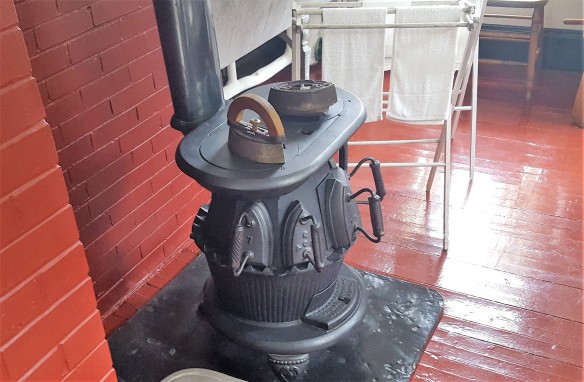 The view from the back of the house.

The back of the cottage.

The dark things in the water in the background are Atlantic Salmon breeding nets. 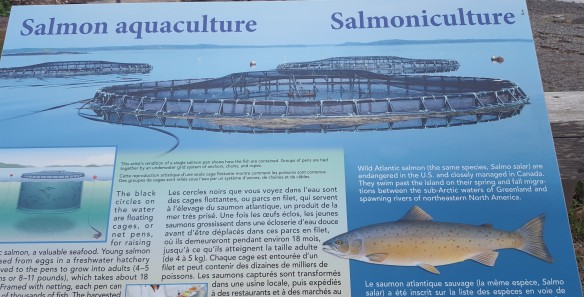 The New Brunwick’s salmon aquaculture industry began in 1978. Young salmon are raised from eggs in a freshwater hatchery and moved to the pens to grow into adults (8-11 lbs), which takes about 18 months. Framed with netting, each pen holds tens of thousands of fish. The harvested fish are processed locally and shipped world wide. 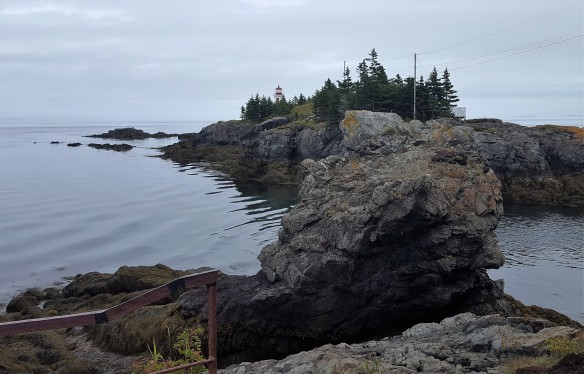 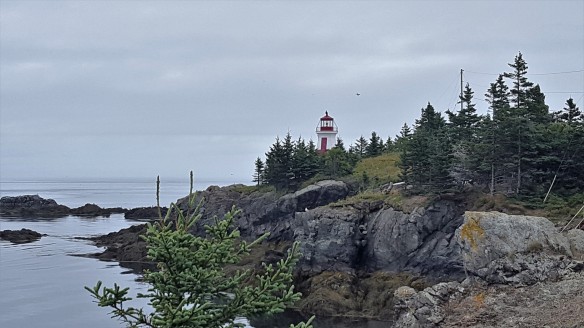 This is as close as we could get.  You have to come at low tide to get there.

Incoming tide rises 5 feet per hour.  You could be stranded for 8 hours.  You cannot wade or swim because that is extremely dangerous. If you want to see some really nice photographs of this area, check out RoadsLessTraveled.

Cute houses on the island. 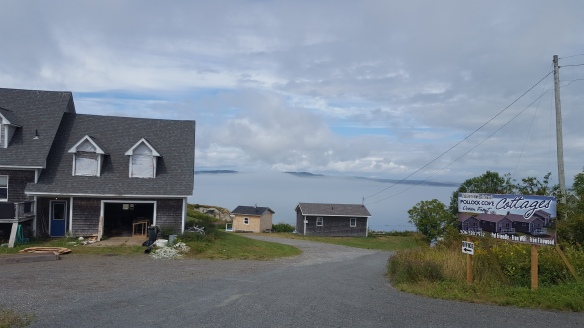 The fog is beginning to lift. 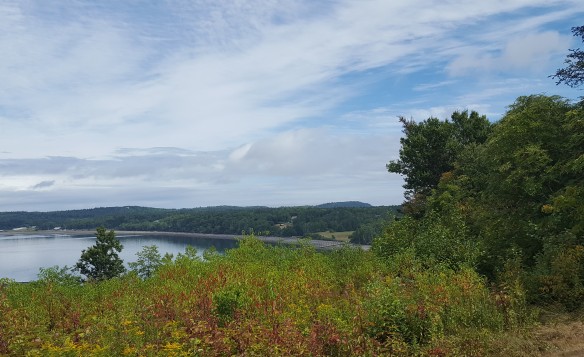 From Friar’s Head you can see the backyard of Roosevelt’s place. The clearing on the right.

The Campobello Company was started by a group of businessmen from Boston and New York in 1881. They bought most of the island and their plan was to promote the island as a summer resort. They constructed large, luxurious hotels.  FDR came as a child.  They stayed in the hotel on the left in 1883. Called the Tyn-y-Coed (Welsh for “house in the woods”).

The Mulholland Point Lighthouse.  This is the one at the beginning of this post in the fog from Lubec. Built in 1885. Decommissioned in 1963. It was eventually sold to the Look Brothers, who donated it to the Roosevelt Campobello International Park Commission in 1984.

Back to the Untied States. 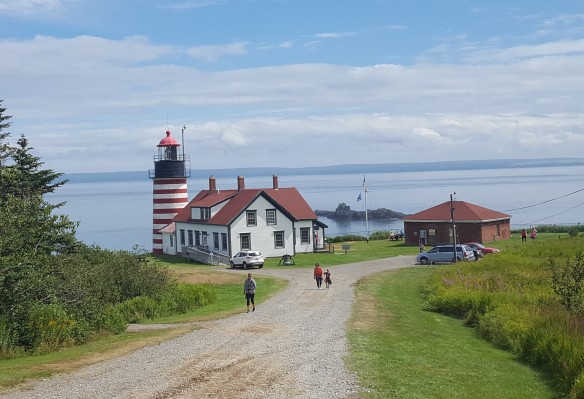 West Quoddy Lighthouse. The Easternmost Point in the United States. 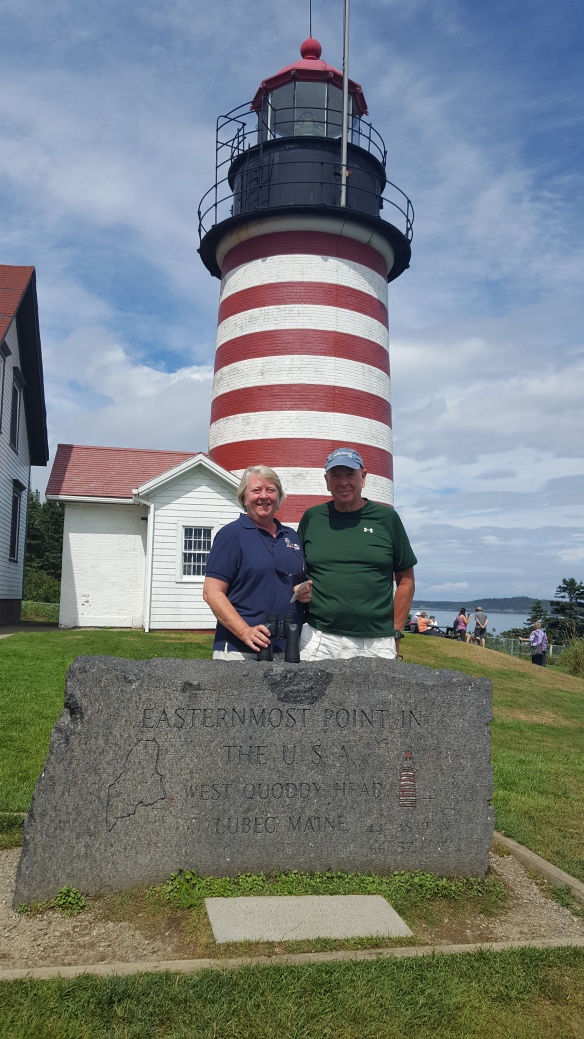 We made it. I think it odd that the easternmost point is called the WEST Quoddy Lighthouse.

It has turned out to be a beautiful day.

We were at the tip.

We stopped at Helen’s in Machias, ME.

We went with our RV twins, Chuck and Debra from Texas.

It rained off and on the whole show.  These guys never missed a beat. 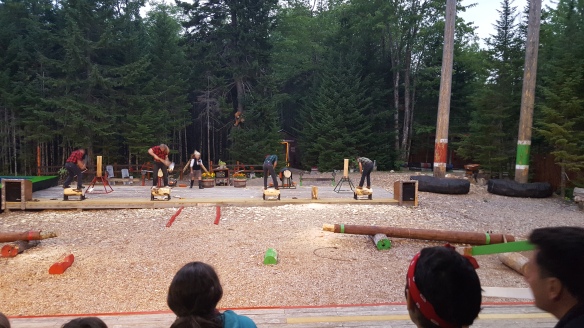 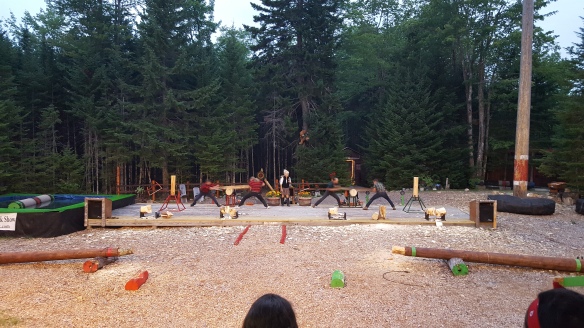 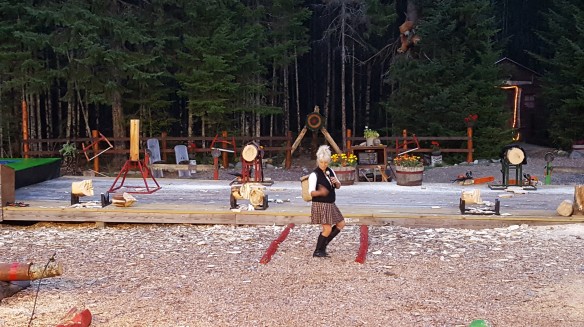 Timber Tina runs the show.  She is very funny and entertaining.  Her brother used to own the Lumberjack show in Pigeon Forge before he sold it to Dollywood.  She is very knowledgeable about the timber industry.  I highly recommend this show if you are ever in Trenton, Maine. 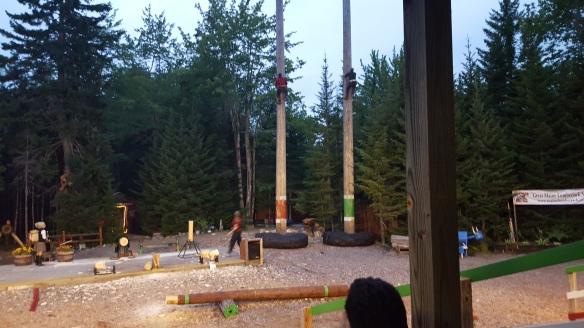 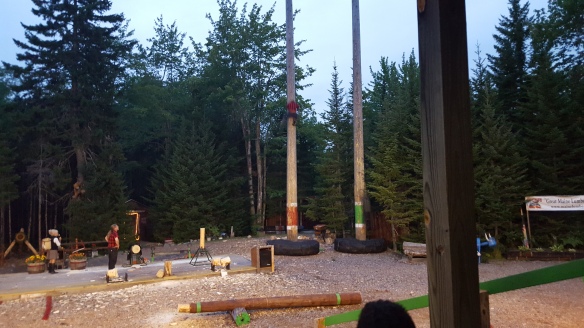 This literally took seconds.  It was amazing. 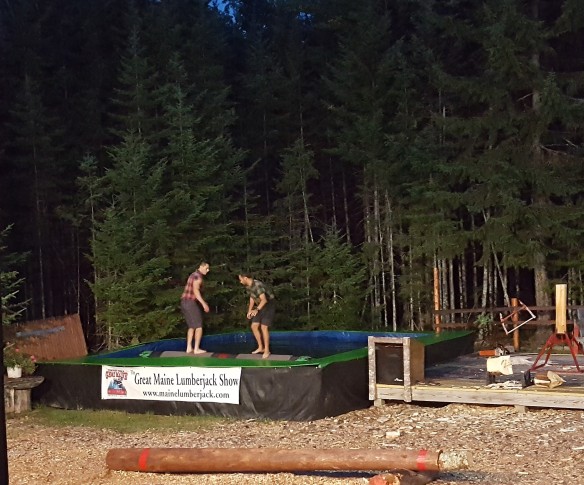 Log rolling. I have a video, but for some reason I cannot add it here.  I need to figure that out. 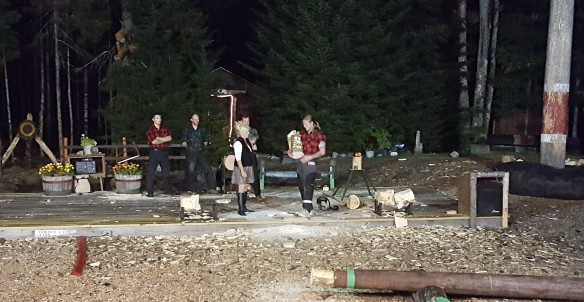 It was very entertaining. A fun evening to end our stay near Bar Harbor.

Off to Wells Beach, Maine tomorrow.